_Below is the text of the commencement address by Thomas J. Miller, for IITR’s convocation held September 21, 2013._ 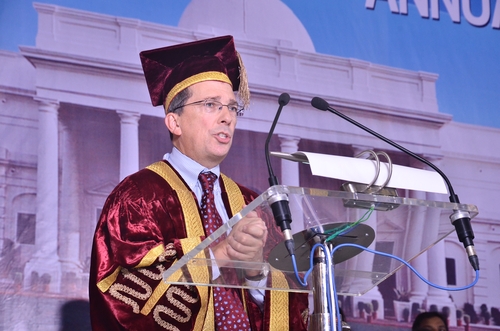 Ladies and Gentlemen, distinguished guests. I’m a little nervous. This is quite an honor, so I hope you are kind to me during the next period when I’m speaking to you, sharing some thoughts. My thoughts are actually structured in three parts:

The first part is an apology. You see, the majority of what I’m going to talk about are the ideas that I have received from a poet, a musician and an artist. And you might think to yourself, “Does this little American know, where he is? After all, we are the graduates of Indian Institute of Technology. We have mastered the calculus. Our hands have created new molecules, nano particles, we have wielded the inductively coupled plasma mass spectrometer. We have conquered quantum electrodynamics, of course, whose names strike fear in liberal arts majors around the world and yet you come to us talking about ideas from a poet, a musician and an artist.”

The good news to all you graduates is there’s no test, you’ve taken all of those. You don’t have to listen, look around you find someone attractive, fantasize, whatever else you’d like to do. You could ignore the rest of my comments. But if you find nothing useful, I apologize.

Part two of my comments, in which I destroy your expectations. You see at times like this, everyone comes with expectations about what the chief guest should say. The expectations are usually that at this time you are looking at the future of all these graduates. You are going to celebrate and talk about the great success and the joy of their triumph. But instead of talking about the future and success and joy, I have chosen to speak about the past, difficulty and despair. And I’m not kidding.

“Consider the pathetic human. We are a comical creature. Our claws are not long enough or sharp enough to defend ourselves from attack. Our teeth and jaws are inadequate to hunt and kill prey. Our hair grows in funny comical patches around our body inadequate to shield ourselves from the elements. We can run but not very fast, we climb but not very well, we swim but others can swim better. How is it that this soft, weak, hairless creature has come to so dominate the planet, for better or for worse?”

I think there are three reasons. The first would be obvious to any alien that came down and watched us for a little while. They would observe that this creature emits a complicated series of grunts from his orifice of ingestion. These complicated series of grunts allow him to communicate with others of his like. Communicate very complicated things like “Go to the hardware store Swensons not Ericssons hardware store. Pick up a two pound box of six penny galvanized roofing nails” or “That is not the kind of Rembrandt I like” or “I love you,

Communicating allows us to communicate with our past. To be informed of such things as to where to find the best food, how to construct the best shelters, what herbs and leaves might be used as defense against disease, how to attract and hold a mate, although that still requires work.

But communication itself is insufficient to explain our dominance. The second reason I believe is the human being’s love of difficulty.

You might find that surprising if you read the brochures of the travel industry, they would have you believe that we like fun and frolic, fun beaches and casinos. But I don’t think that’s true. I think humans like difficulty. How else do you explain video games? Video games are nothing more than electronic canned difficulty. You master one level, you go to the next level. You master that, you go to the next level because it’s difficult. How else do you explain why men and women of great achievement after reaching the pinnacles of their career retire and then spend their time with a funny stick, a small white ball trying to chase it into a very distant hole because it’s difficult.

Difficulty is important because it means when the past informs the future, the future doesn’t simply accept it. We change it, we modify it we make it better. Indeed, we no longer live in caves. We no longer hunt and gather food. Even the mating dances and rituals have improved. (does a funny dance move as he speaks). Did I just do this in front of you? Sorry, that wasn’t intended. I told you I’m nervous.

This means that each generation does something that no other organism can do. We accelerate our evolution. Every other organism on this planet evolves by passing on genetic material and mutations and if those mutations work, they improve! We evolve because the next generation listens to the past, rejects some of what they say and does things that are difficult. Those who really do difficult things have the drive to master them. And it’s the mastery of difficult things that the people here have done and we are celebrating.

But it requires a third reason as well. Because when we try to do something very very difficult, the likelihood is that you may fail. You may think you might never succeed. And you may lapse into despair. The best example of this I know is also from a poet. A poet named Michelangelo Buonarroti. You might know him instead as a visual artist, the sculptor, the painter of the Sistine Chapel. But he also wrote poetry, he wrote sonnets. And he wrote a sonnet, a poem in the form of a letter to a colleague of his at the time he was painting the Sistine Chapel. As you all know that work of art, if you listed the 10 most important works of art of the entire Western Civilization, it would be among them. Five million people per year go to the Sistine Chapel, crane their necks, look up at the ceiling to see his depiction of the creation. I would like to read to you a poem that Michelangelo wrote to his colleague at the occasion of the painting of the Sistine Chapel.

“When the Author Was Painting the Vault of the Sistine Chapel”

I’ve already grown a goiter from this torture,

(or anywhere else where the stagnant water’s poison).

My stomach’s squashed under my chin, my beard’s

pointing at heaven, my brain’s crushed in a casket,

above me all the time, dribbles paint

so my face makes a fine floor for droppings!

My haunches are grinding into my guts,

my poor ass strains to work as a counterweight,

every gesture I make is blind and aimless.

My skin hangs loose below me, my spine’s

all knotted from folding over itself.

my thoughts are crazy, perfidious tripe

My painting is dead.

Defend it for me, Giovanni, protect my honor.

I am not in the right place—I am not a painter.

If you think about this for a moment, here is a man in the middle of a 4 year project, wrote this in 1509, actually 2 years after he started and he says about the painting, visited by 5 million people a year, “My painting is dead, protect my honor. I’m not in the right place-I am not a painter”.

If you try to do something very difficult, you may lapse into despair. Humans are great because they overcome despair and in spite of feeling like everything is against them, they persevere and achieve. Therefore the three things that make humans great should be embodied in everyone who graduates here. They’ve been instructed by the past, they’ve done something very difficult, but you don’t have to at least despair now, because you will get your degree, but in the future you will have to overcome despair.

Part 3. The third part of my comments for you are some advice and a wish. Your degree may be seen by you as a ticket to a good life. You worked very hard after all, you deserve it! You’ll probably get job offers, you’ll have a great career, may have financial success, your parents and loved ones will be proud of you. These are all wonderful things. It’s not what I wish for you. I wish for you something else.

But first, I will advise you of something. What I will advise you of, is actually similar to comments made by others. Say true to the lessons you have learned here. In my career, I have had many successes, those were mentioned. I’ve had some failures, I don’t talk about those so much. My successes and failures have all things in common. I was successful whenever I followed the scientific method. I gathered data about what I needed to do. I analyzed it without bias. I constructed a hypothesis which I tested with real and virtual experiments. Constructed a thesis that I knew was sound and then I implemented a plan of action that almost always led to success. I failed whenever I did what business folks and politicians say. Rushing in and taking action in the first 100 days before I knew what I was doing. Doing what was popular or what was expected of me by my superiors. Ignore all of those things. Stay true to your studies and you are likely to succeed in the challenges I am about to give you.

There has never been a sustainable increase improvement in the human condition that was sustainable and global which was not triggered by technology.

All of these problems are technical problems. There is no one to solve these problems but you. These are difficult things to do. You may despair of ever having success. But I leave you then with my wish.

My wish is that each and every one of you find an important and pleasurable difficulty, a difficulty of which you have now proven yourselves worthy.

Thank you very much for your attention.